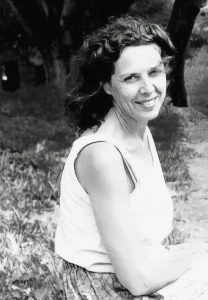 Marion Baraitser is a playwright, short story writer, translator, and editor. ​She gained a PhD on her published creative writings at Roehampton University, London. Baraitser is the founder of Loki Books, a small press which focuses on new fiction and translation from minority languages. Loki Books has been supported by the Arts Council and received awards from the UNESCO as well as the European Jewish Publications Society. It has published widely on topics of contemporary Jewish identity. Works include Baraitser and Sonja Linden (eds.) Bottled Notes From Underground: Contemporary Plays by Jewish Writers (1998) and Baraitser and Laura Phillips (eds.) Mordecai’s First Brush with Love: New Stories by Jewish Women in Britain (2004).

Baraitser has furthermore worked as a tutor in English literature at the Birkbeck Extramural Department of London University and taught Creative Writing at Morley College, City Lit Institute. In 1997, she attended the ‘Women Writers Talk Peace’ conference in Israel on a British Council travel award.

Baraitser’s plays include The Story of an African Farm (2000) and The Crystal Den which was performed at the New End Theatre, London in 2002 and was awarded a Jewish Book Council grant. Her latest non-fictional book, Reading and Expressive Writing with Traumatised Children, Young Refugees and Asylum Seekers (2014), is based on her work with young asylum seekers.