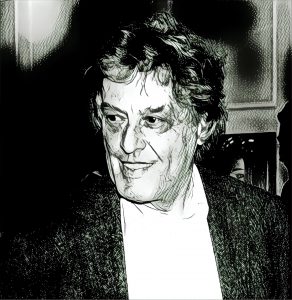 Tom Stoppard is a playwright and screenwriter. He was born in Czechoslovakia in 1937. His parents were both non-observant Jews and fled to live in Singapore. From 1953 to 1954 Stoppard wrote radio plays and in 1960 he completed his first stage play, A Walk on the Water. Stoppard wrote his play Rosencrantz and Guildenstem Are Dead (1966); after this ‘Stoppardian’ became a term used to describe plays containing wit and humor whilst still addressing philosophical ideas. It was popular at the Edinburgh Fringe Festival and won the 1968 Tony Award. In 1976, he won the Tony Award again for Travesties (1974). In total, Stoppard won the Tony Award for author of a Best Play four times. He has adapted many of his works from the stage into the mediums of radio, television, and films. Stoppard was named as one of Time Magazine’s 100 most influential people. He is also a patron of the charity Shakespeare Schools Festival.

Stoppards new play, Leopoldstadt, is set in the Jewish community of early twentieth-century Vienna. It will be directed by Patrick Marber, with its premiere at Wyndham’s Theatre in January 2020.

—. Rosencrantz and Guildenstern are Dead. London: Faber and Faber, 1971.

—. Plays 2: The Dissolution of Dominic Boot; “M” Is for Moon Among Other Things; If You’re Glad I’ll Be Frank; Albert’s Bridge; Where Are They Now?; Artist Descending a Staircase; The Dog It Was That Died; In the Native State; On Dover Beach. London: Faber and Faber, 2012.