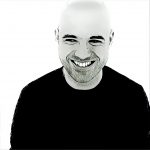 Laughton was the associate producer of the film Unknown White Male (2005) which was shortlisted for an Academy Award. He also co-directed the short film Recompense (2011) which won the categories of Best Actor, Best Actress, and Best Directorial Debut at the New York Independent Film Festival.

Laughton’s first play Marina Abramović is Staring at Me (2011) opened the Railroad Theatre in Newburgh, NY. In 2011/2012, Laughton was part of the Royal Court Theatre Invitational Writer’s Group. In 2013, he took part in several development workshops with the Young Vic Theatre and SoundBites. His play 9 (Lives) (2015) was part of the PlayWROUGHT#3 Festival at the Arcola Theatre in London. The following play, Run, opened at the Vaults Festival in 2016 and went on to tour the UK until April 2017 to much critical acclaim. Well received was also his play SCREENS (2016) which opened at the Theatre 503. Laughton’s 2016 short film RWD/FWD was nominated for a Drum Content Award and won the Long Form Charity Film Award in 2017. One Jewish Boy, a play about rising antisemitism, premiered at the Old Red Lion Theatre in December 2018. It faced aggressive antisemitic abuse, both physical and virtual.

In 2019, Laughton won the JB Priestley Award for Young Writers of Promise as well as a Developing Your Creating Practice Award from the Arts Council England to undertake a writing residency within the Astrophysics Department at the American Museum of Natural History, in New York.