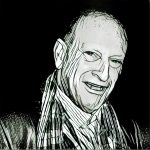 Nicholas de Jongh is a British theatre critic and playwright who was born in 1944 to a secular Jewish family.

De Jongh has had a long and successful career as a theatre critic. He worked as a journalist for the Guardian for almost twenty years before becoming a senior critic for the Evening Standard (1991-2009). De Jongh is known as one of the harshest and most controversial theatre critics in Britain, which resulted in various disputes and arguments with other playwrights. In recent years, de Jongh has become active as a dramatist himself. His play Plague over England (2008) was a great success. It depicts the lives of the homosexual community in England during the 1950s through the story of the actor John Gielgud’s arrest for homosexual soliciting.

Following the success of his debut play, de Jongh resigned from his post at the Evening Standard to focus solely on his work as a writer. He has also written two non-fictional books. The first, Not in Front of the Audience (1992), centres around homosexuality in English drama and the second, Politics, Pruderies and Perversions (2000), deals with the history of censorship in British theatre.