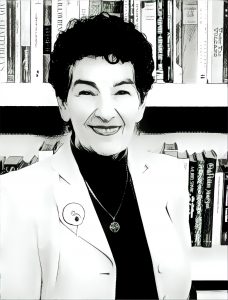 Phyllis Lassner is professor emerita in the Crown Center for Jewish and Israel Studies and Gender Studies at Northwestern University.  She has published on interwar and wartime women writers, including two books on Elizabeth Bowen, British Women Writers of World War II: Battlegrounds of their Own (St. Martin’s, 1998), Colonial Strangers: Women Writing the End of the British Empire (Rutgers University Press, 2004), Anglo-Jewish Women Writing the Holocaust: Displaced Witnesses (Palgrave Macmillan, 2009), as well as essays on Holocaust representation in literature and film. Her most recent book is Espionage and Exile: Fascism and Anti-Fascism in British Spy Fiction and Film (Edinburgh University Press, 2016). She was the recipient of the International Diamond Jubilee Fellowship at Southampton University, UK.  Her current research concerns Holocaust refugee art, Polish post-Holocaust film, and British Holocaust theatre. She co-edited the 2017 special issue of The Space Between journal on the subject of “Espionage as Cultural Artifact” and is a past co-president of The Space Between. She now serves on its advisory board as well as the advisory board of the Holocaust Education Foundation.